We were recently delighted to host Professor Venkat Gopalan from Ohio State University in the lab! Professor Gopalan studies RNase P, an ancient RNA that catalyzes a key reaction required for all life. It’s discovery by Sidney Altman earned him a Nobel Prize in Chemistry 1989 for the discovery that RNA molecules can catalyze chemical reactions. After training with Professor Altman at Yale, Professor Gopalan started his laboratory at Ohio State where he has continued to investigate many of the fascinating mysteries behind this critical RNA molecule. During his visit, Professor Gopalan worked alongside our very own Kyle Watters to learn the ins and outs of SHAPE-Seq. We are looking forward to some exciting SHAPE-Seq data to come out of the this joint initiative! 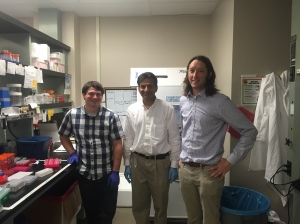 For those wanting a bit more: RNase P is responsible for cleaving transfer RNAs before they can be used by the ribosome for protein synthesis. Without this step in tRNA biogenesis, proteins cannot not be made and life in its modern form would cease. Because of its role in this core process, many believe that RNase P is an ancient molecule that represents an evolutionary gateway between a primordial molecular world and the one we now know. Because some RNase P variants can perform their catalysis without any protein factors, they are called ribozymes (RNA enzymes). The existence of ribozymes have led to the hypothesis of an ‘RNA world’ that existed before the emergence of proteins, where all genetic information propagation and catalysis was performed by RNAs.

A bit of Cornell History: The discovery of the sequence and structure of transfer RNA was done at Cornell by Robert Holley. Holley shared the Nobel Prize in Physiology or Medicine in 1968 with Nirenberg and Khorana for the deciphering of the genetic code that uses DNA sequence to specify protein synthesis. Right across the street from the Boyce Thompson Institute is the Holley building where you will see a commemorative plaque with the transfer RNA structure on it!